This is a summary, kind of, of part of a Science Showoff slot I did back in April.

One of the first decisions we were asked to make when our baby was born (I suspect because he was in the neonatal unit) was whether or not to give him a pacifier, otherwise known as a dummy. I've never had a particular prejudice one way or the other, but I've since met a lot of UK parents who either are very proud their baby doesn't use one, or who say they don't like how they look, or who are happy their child sucks their thumb. And the very term for it tells you how they are seen in the UK - dialect words are more neutral (soother, dodie) as is the US word pacifier.

There's some very emotive language out there - both from lay people ("can't you take that thing out of his mouth" - My mother, 2012) and from researchers ("Harmful oral suction habits" - just as a for example, Moimaz et al., 2010)

The two main objections that people seem to have are that pacifiers harm babies' teeth, causing malocclusions (misalignment, aka overbite or underbite) and that they slow babies down in learning to talk.

So, what's the evidence for these?

Thumb/finger sucking and sucking a pacifier tend to be know, together, as "non-nutritive sucking". Both types of these have definitely been associated with malocclusions - for example, here they are compared to bottle and breast feeding, and the type of feeding didn't make as much of a difference to children's dental alignment as did sucking a comforter (of whatever type).

From that point of view, yes, sucking a pacifier does seem to cause some dental problems. But is there an alternative? Should parents just not let their child have a pacifier? Should we have said no?

Well, if parents don't allow children to have a pacifier - the likelihood is that  they will suck their thumb or finger.  If both of these can cause dental problems, maybe that's OK. And if your mum is complaining about the pacifier, maybe she wouldn't complain as much about the thumb. That article is pretty old, but this issue seems to bother people less currently, so there isn't much later research looking at the same thing.

One of the largest studies of infants and children in the UK, ALSPAC, has some great data showing why it might not be such a good idea to prefer thumb/finger sucking over pacifier sucking.  Firstly, pacifier use was more common among less well off and less educated families (see, I knew everyone thought I was a slummy mummy for using one!). But although at 15 months almost twice as many children used a pacifier as a thumb/finger, by 36 months about the same number used each one. So, pacifier users were twice as likely to drop the sucking habit by the age of 3. If you don't want your child to turn out like Pike in Dad's Army, still sucking his thumb at the age of 17, better stick to pacifiers.

What about speech and language? Well, there's very little evidence here at all - but basically it doesn't make any difference (pdf).Children who've used a pacifier for a long time have no more speech problems than those who haven't.

There are some good things about pacifiers - they do seem to reduce the risk of SIDS, and obviously sucking in general (not just pacifiers) soothes babies, as well as older toddlers.  There does though seem to be some evidence for an increase in middle ear infections in babies who use pacifiers. The evidence for reduction in SIDS seems to be about as strong as the evidence for increased middle ear infections. As one is a lot more serious than the other, on balance for health reasons using a pacifier is probably better than not.

But you know, that isn't going to stop your mother from telling you it "looks bad" for your baby to use a pacifier. So, here's my husband's suggestion for what to do with your mother: 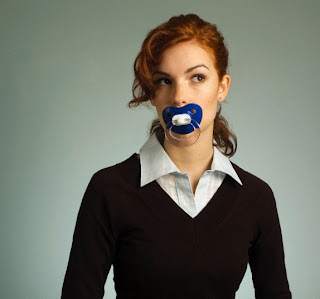 What is Evidence-based Parenting?